With the Federal Reserve finally getting hip to learning how to dance to the back beat, in this case runaway inflation, the markets are now pricing in a ‘fully powered and operational (monetary) battlestation’. Star Wars geeks, admit it, you love the analogy! 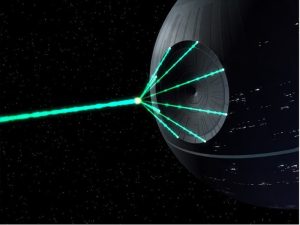 And this is what that looks like in real interest rate terms, at least to date. Notice the target rate is still roughly a double from here. As the chart tells the story, 3.4% to 4.0% will be the highest rate in fourteen years. And if it keeps going from there, possibly the highest in two decades. But that’s what happens when the asset side of the ledger gets juiced and the liability side can’t keep up. 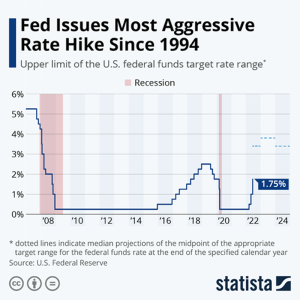 A very big change at the margin has been Fed Chair Powell’s use of the phrase ‘unconditional’ when talking about the world’s most important central banks resolve for curbing inflation. I’ve been in the business since 1996 and have never seen this kind of directionary regime change as it relates to the trajectory of the price of money. I don’t think I’m alone in saying this is a whole new ballgame for most everyone on Wall Street. We’ve also spent more time on Main Street this year and see it. From pauper to prince, what we pay for goods, services, and assets is front of mind. Let’s go Jerry, time to earn your keep. The whole world is clearly watching. 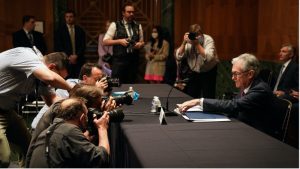 In terms of economic releases of market moving relevance, this week was a a bust, and next week should be the same through Thursday when we get a read on personal income and inflation. The so called PCE is what the Fed looks at for inflationary guidance, even though it doesn’t include food and energy, which of course is ass backwards. If by whatever miracle this levels off, we can see the markets get excited about a possible backing off the rate hike throttle. 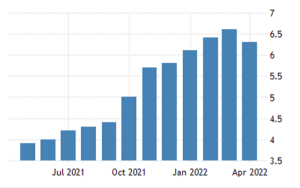 It’s been an interesting time in the markets the past several months as excesses have been wrung out. While we can’t fully claim ‘we told you so’, there for sure has been a ‘be careful what you wish for’ theme last year when assets were only going up. While feeling somewhat vindicated by seeing reality making an appearance, we don’t wish massive losses on (most) anyone. So when the quants at SoGen start talking about 25% losees for the S&P 500 from here, we cast a weary eye. That said, we too can read a chart. 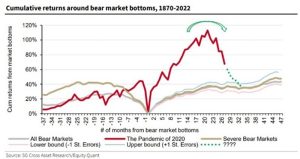 The ubiquitous Mark Zandi, Chief Economist at Moody’s, was out this week saying there will be a ‘coast to coast’ housing correction as interest rates rise. This makes sense to anyone who watches asset prices and knows that trees don’t grow to the sky. While this chart dates to November of last year, it is stil ‘scary a-f’ as the hip kids like to say. None of this is even close to sustainable. On a personal note, my future home state of Montana better cool the efff off it might not be my future home state. Anyone know anything about Nebraska? 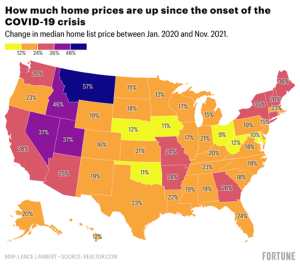 In sign for common sense for a world seemingly gone mad, the FDA has finally banned Juul from the markets. This is stock moving news for Phillip Morris which owns 35% of the company, and is just one more reason why Philly Mo has been, is, and should be a short for those with ESG loving DNA in their blood. Thank you God, for listening to our pleas. 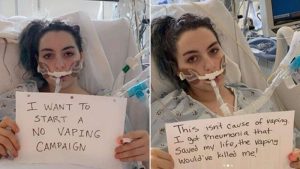 A different kind of mad has been the not so shocking success of ‘Top Gun: Maverick’. By the end of June it will gross over $1 billion in worldwide box office sales. Even by Hollywood’s inflated image of itself, that’s a colossal success. We caught it earlier this month and it’s as good as advertised. Nobody loathes the suspension of disbelief more than myself when it comes to movies. This one pushed the envelope, but it didn’t go over the edge. That’s a key theme to the film, and watching Naval aviators pass out pushing 10 Gs has never been so entertaining. “We were inverted, sir”. 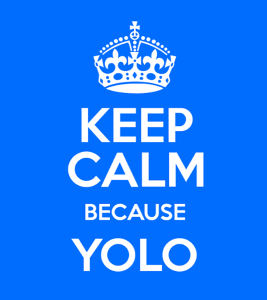 Earlier this week I clocked the 50 year mark. But as I like to say, ‘it ain’t the years, it’s the miles that matter’. And I’ve traveled a few in the past couple of years. My most recent ones have taken me back to Montana from California, which is the last thing John Dutton wants to hear. 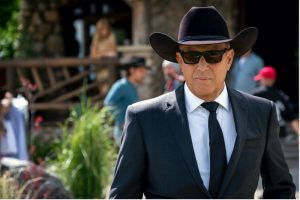 This trip was a little different as I hightailed it earlier than I planned to get to Red Lodge, and make sure the family property was still upright and dry after the recent floods. To give you a sense of reference, we can hear Rock Creek from the front porch and are about 200 yards west of the house with the green roof in the lower center of this shot. 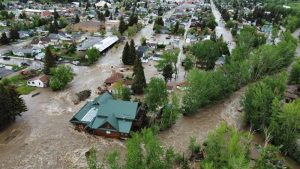 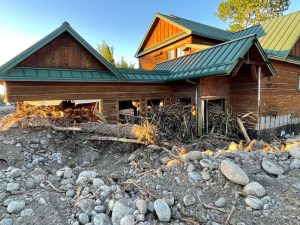 All turned out to be well and good for our own property. It’s a funny thing how a few feet of elevation change can save everything, but it did. While it was too close for comfort we remain on the dry side of the equation. Knock on Cottonwood. So on the 50th anniversary of me being brought into this world, I wound up being Chef de Cusinse for breakfast, lunch, and dinner at the local 4-H barn that had been converted into the Red Cross disaster relief center. Along which comes a conversion to the bunkhouse for the Montana National Guard stationed here. It was very rearding, and the metaphorical birthday PJ to the Bahamas can wait. The sargent on the far right likes his burger extra rare. “Sir,yes sir!”. Made to order, thank you for your service. 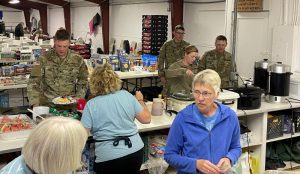 With that, we remind you that even with all the crap that is bearing down on this world, and it’s a lot of crap right now, you never forget that time is your most precious commodity. You only have so many hours in this life make each one your very own masterpiece. This was the Summer Solticce sunrise over the same beat up little mountain town on the edge of the Montana wilderness. Life isn’t always fair, but it sure can be grand.